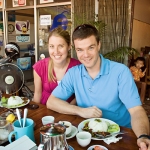 I am making good to my pledge to go back and blog about some of our adventures that I didn’t quite have time to do in real time. Some of you may have seen pictures on facebook, but I’m going back and adding in the good parts (aka-my thoughts) on the entire trip.  I’m going to start working my way backwards, starting with the last big trip we took  in December over the holidays. We wanted to do a bit of a “Farewell Asia” tour and hit some of the spots that we hadn’t had a chance to do yet. Using two weeks of my Christmas break we headed out to Siem Reap, Cambodia, Krabi, Thailand, and Hanoi, Vietnam.

The first place we went was Cambodia and out of the three places, it was my favorite without a doubt. It was the poorest country I have ever been to and is recovering from an amazingly horrible history, but the people we met had a quiet determination and seemed so genuinely nice and kind in a way that I’m not sure if I would be if I was in their place.

The Siem Reap airport was surprisingly modern and nice and our driver picked us up right out front, which is always a  relief when you are very clearly a tourist in country that is unknown to you. He took us to our hotel, the Golden Temple Hotel. As cheesy as the name is, it was one of the best hotel we have ever stayed at. Not the fanciest, not the most expensive, but the nicest people, a great location, lovely room, spa treatments, THE WORKS! If you are ever in the neighborhood you should forgo the Holiday Inn and stay at the Golden Temple Hotel instead.  For breakfast our driver took us to a local hang out for a traditional Cambodia breakfast of meat, rice and some cucumbers on the side. 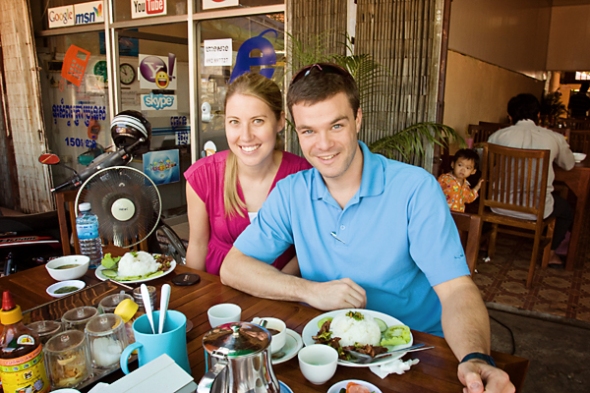 After breakfast we headed to the temples. Over the next two days, we saw lots and lots of temples, each with their own unique story and symbolism. The coolest thing about them temples is the fact that they are from the 12th century! Having lasted as long as they have, through all the conflicts that Cambodia has had, to still be standing is pretty remarkable. Here are a few of my favorites: 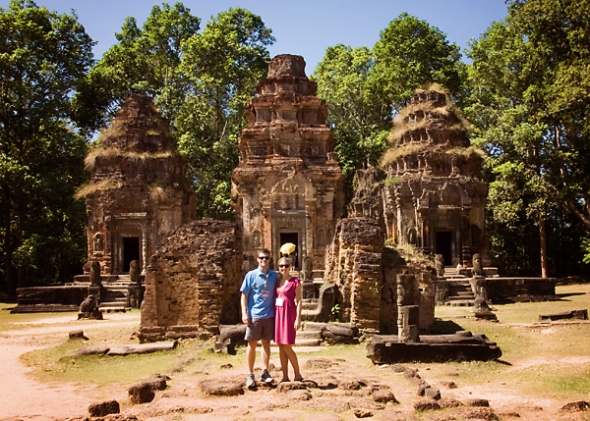 One of many temples in Cambodia 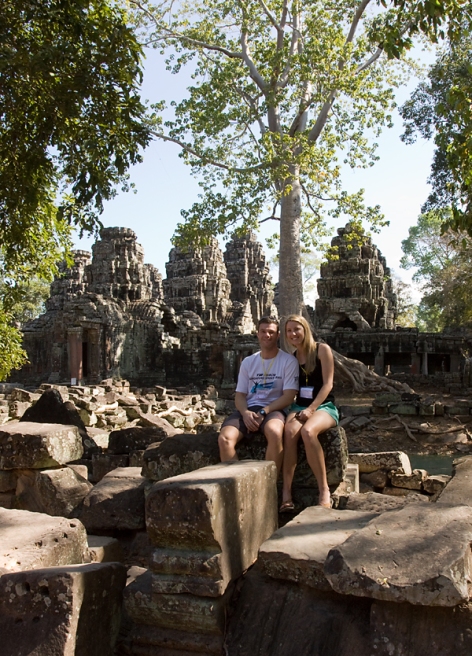 Where they filmed a little movie called "Tomb Raider." 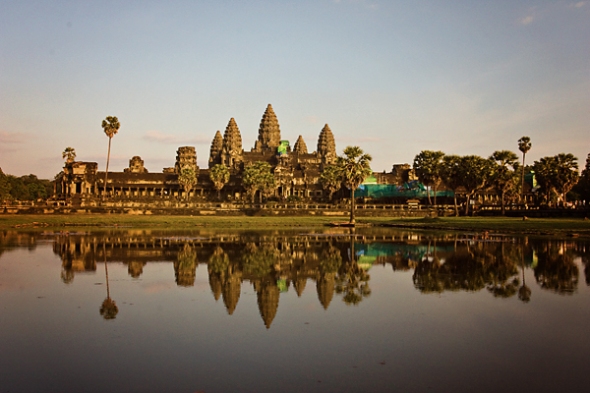 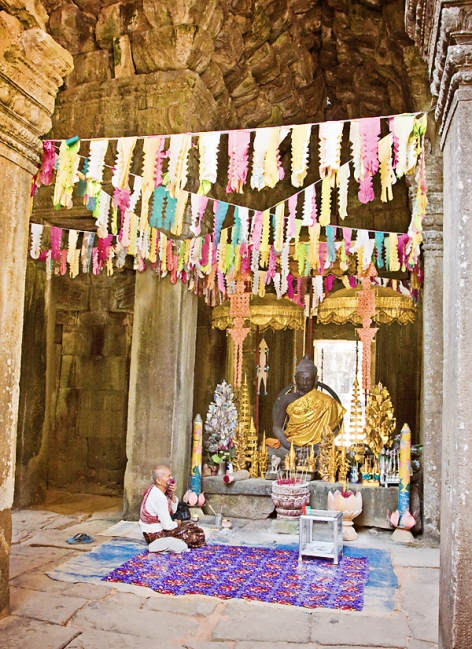 A shrine with prayer flags in one of temples.

At the end of the day, as we were having dinner at a french restaurant overlooking downtown Siem Reap and we saw the mother of all motorbikes. We have seen a lot of things and people on motorbikes since we have been in Asia, but this was a new record-six people on one motorbike!!! Count carefully! It was the perfect way to end the day. 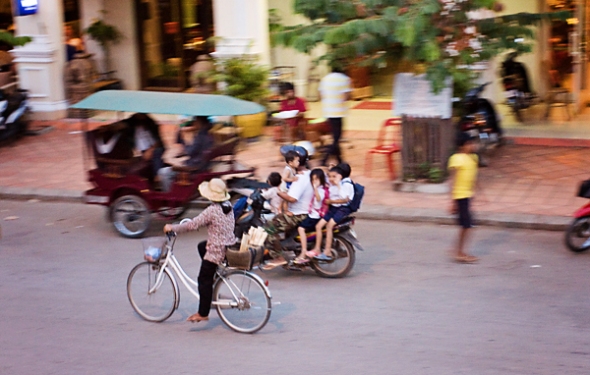 The record for people on a motorbike-6!!!

So, have you ever seen six people on a motorbike? Or, dare I say it-MORE? What is the most bizarre thing you have ever seen being carried on a motorbike, domestically or international?

That is the official Thailand Tourism Bureau’s tagline. (http://www.tourismthailand.org/campaign/en/)

Dan and I have made fun of it since we got here.

It’s like when your teacher would say that you couldn’t use the word you were defining in your definition, right? Like there wasn’t another adjective we could have used in the second sentence?

Regardless, after last weekends trip to Thailand, I am willing to cut them a little slack on the redundancy of the tagline, because AMAZING is the one word I kept using to describe what we saw.

Warning: This is a post filled with some not so beautiful photographs, to highlight an absolutely gorgeous event that we happened upon in Chiang Mai Thailand last weekend. This post showcases some poor, poor picture taking skills. I almost didn’t use any of my pictures, and the rest of them are on facebook if you want to see them in all their glory. A few excuses: First of all, I didn’t bring my big camera (who thought you would need it for a teaching conference?!), which would clearly have been better to be able to adjust ISO and such.  I only had my little camera. But, I haven’t really learned how to use my little one because I always use my big one! (lesson learned) Plus, once I realized what was going on, I really was so excited that I was just pushing buttons on the camera and jumping up and down at the idea that I happened to be in Thailand on the night that this lantern festival was happening. I swear I know how to take night photographs. Swear.

Last weekend,  few friends/colleagues and I were headed to a teaching workshop in the north of Thailand. We were looking forward to a few things, namely amazing Thai food, cheap messages, cheap beer, and cool weather. We ended up getting all of those things, plus unintentionally being a part of the annual Lantern Festival and the Loi Krathong Festival. I didn’t know anything about it at the time, but this is what I found out about it later.

This old festival held on the full moon night of November is said to be the most charming of all in Thailand. In Chiang Mai, a procession of floats with beautiful maidens sitting on goes through the city to the bank of the Mae Ping River, where hundreds of people assembling to float their banana-leaf containers (krathong) decorated with flowers and candles onto the river to worship the Goddess of Water. Moreover, Lanna-style hot-air lanterns are launched which are believed to help rid the locals of troubles and are also taken to decorate houses and streets.

Sounds pretty cool, right? Well, it looks even cooler. Check out this picture that I did NOT take, but was the closest to what it actually looked like on the streets of Chiang Mai. And still, doesn’t do it justice. 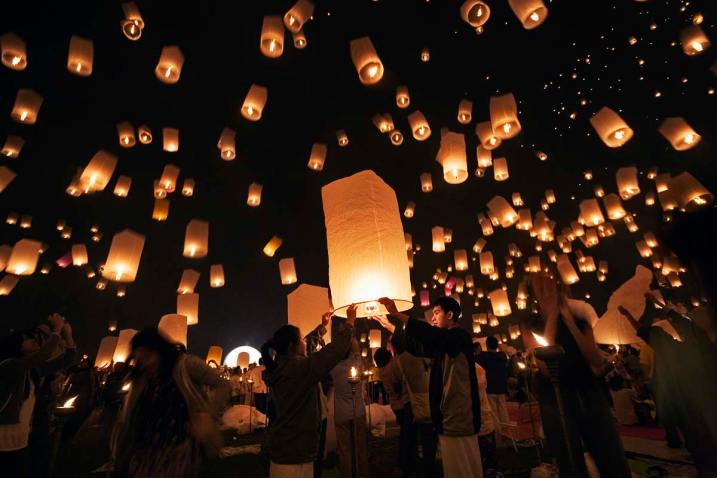 It was beautiful. Amazing, some might say. Everywhere you looked were these lanterns floating, like jellyfish in the sky. It was pretty loud with all of the parades and firecrackers, but when you stopped and looked anywhere in the sky, thousands of floating lanterns were shining against the black sky, and it seemed almost meditative. Really, I can’t explain how many times that night I caught myself just staring at the sky with a huge grin on my face. I don’t know why I liked it so much, but it was a pretty incredible experience. 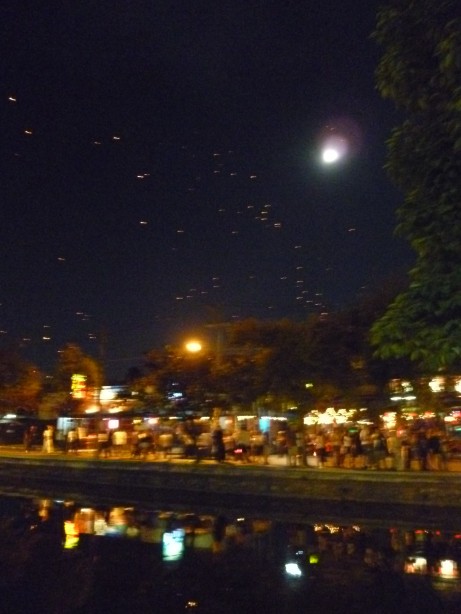 Can you see the lanterns? And the full moon? Oh-and that street light too. 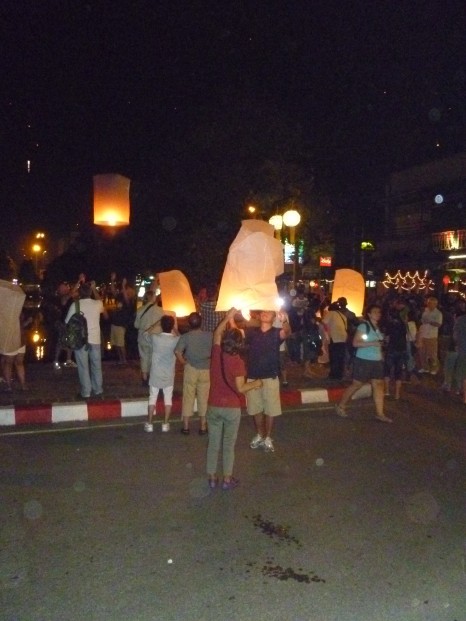 All the people by the river lighting their lanterns. 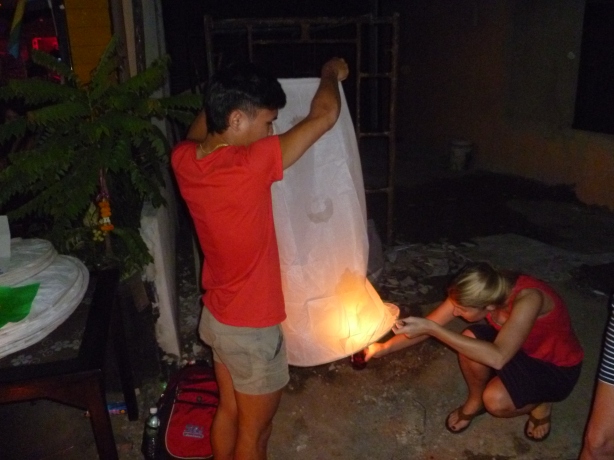 Here I am lighting my lantern.

After I realized what was going on, I wanted to be a part of it! So I ran and got my friends and we bought some lanterns of our own to light and add to the festivities. 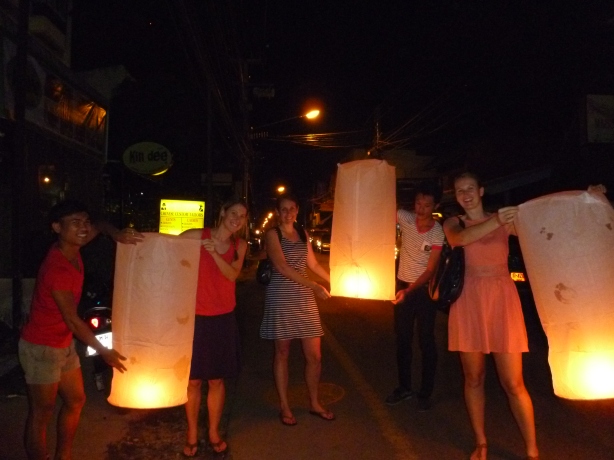 Rebecca, Jenn and I about the let our lanterns go! 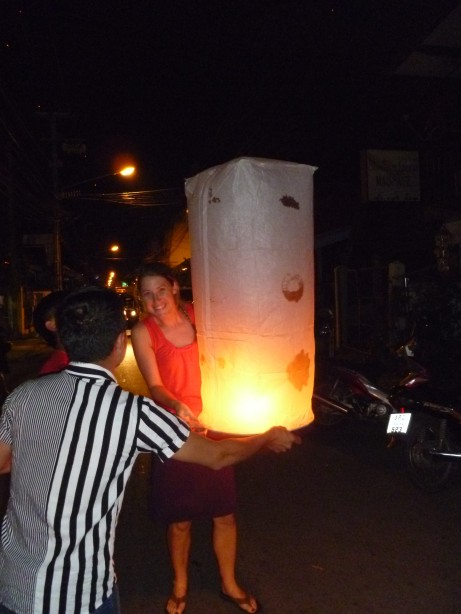 I was pretty excited!

Our new Thai friends didn’t want us to burn the city down, so they helped us with the lighting of the lanterns and told us when there was enough hot air in them to let them go. Before you let them go, all the Thai people started telling us, “Wish, wish!” so we did. (And, no, I can’t tell you mine because then it won’t come true, duh.) Our lanterns almost got caught in the masterful asian telephone wires, which I think would have boded poorly for the wish that I had made, but luckily they all made it through and floated up towards the heavens. Amazing. 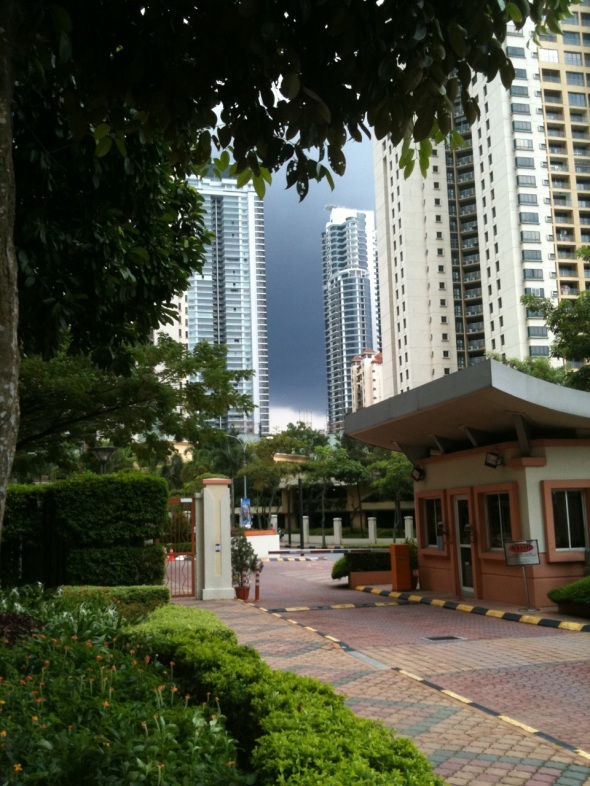 Some might be gearing up for the Thanksgiving season or others looking ahead even further to the Christmas season. But here in Malaysia, we are in the beginning of the monsoon season. It has rained here every day this week so far. Yuck.

I took this just as I literally ran home from school hoping I wouldn’t get caught in the storm and be trapped at school. This storm came with copious amounts of rain, lighting and thunder that shook the entire building, and even a rainbow at the end. 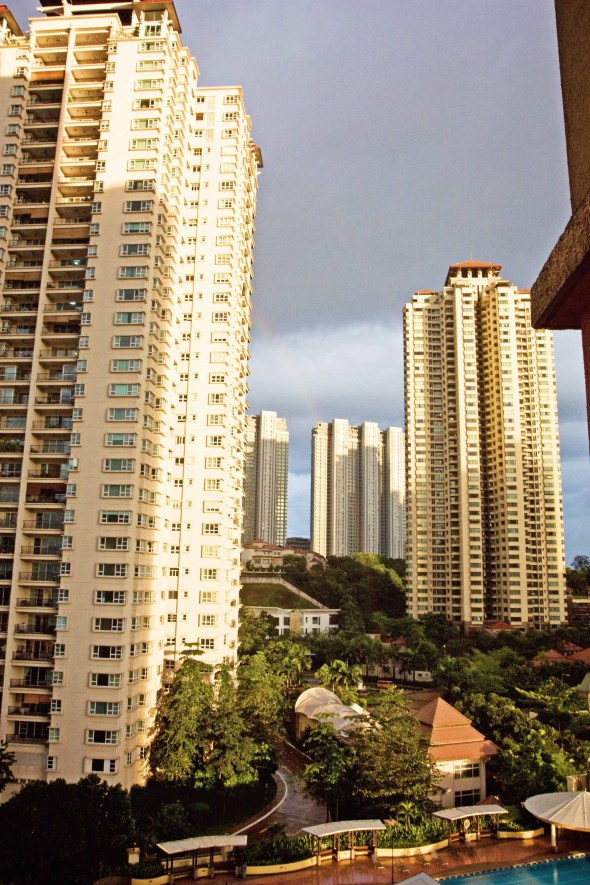 Can you see the rainbow?

This is the view about an hour after I took the first picture, standing on the balcony of our condo.

On this day, I made it home in time. Other days, not so lucky. 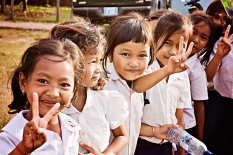