There are so many things that I love about the Australian culture. Not that it is all that different from my American one, but different enough to seem oh-so laid back, clever, and quirky. I adore the Aussies’s love of dogs, beautiful outdoors, fish and chips, meat pies, cheeky television shows, good wine and the fact that they shorten just about every word known to man.  I could go on and on about my love affair with all things Australian, but I’ll save that one for another post on another day. One of my most favorite things about Australia is the fact that they love their fascinators. Now, if you are an American you might have no idea what I am talking about, but I know you have seen them before. According to http://www.squidoo.com a fascinator is described as:

A fashionable hair accessory worn on the head. It may resemble a small hat but is held in place by a band, clip, pin or comb. Fascinators are usually worn by women, along with formal attire. Fascinators may be made from a variety of materials including sinamay, feathers, grosgrain, swarovski crystals, satin, silk, and tulle.

Are you with me now?

It seems like something girls from the south should have been doing all along, and I’m telling you right now, I’m bringing the trend back the the ATL when I come in a few months. Give me two football seasons and everyone will want one. Don’t say I didn’t warn you.

But, back to the fascinators. Our friend Jenn is getting married this summer, (she isn’t Australian, but rather Canadian and marrying an Irishman, so I’m not really sure how we connected this to the Australian fascinators, but…) but we managed to merge our love for fascinators and our love for Jenn and her upcoming marriage. We decided to make our own fascinators because as my friend Rebecca will tell you  (she actually is Australian, owns real fascinators, and is a wealth of information concerning all things Australian) the real ones are quite pricey. Who knew?

My friend Andrea and I headed out to Chinatown to find our supplies (no JoAnn’s or Michael’s here!) and were super pumped when we found these bad boys. Or girls. I’m not sure which one they are. Either way, every proper fascinator needs a bird, or at the very least feathers, right? Along with a bunch of fake flowers, oddly shaped sticks, tulle, glitter, and of course a glue gun, all the elements of a fascinator party were shaping up nicely.

On the day off the party, we donned our dresses, applied make up and even did our hair for the event. (All make up was melted off, hair was up within ten minutes, and I’m pretty sure I had sweated my way through my dress by the time I got to the cab, but the effort was there initially.) We had some lovely scones and tea sandwiches, along with some refreshing beverages that you have to be of a certain age legally to drink. We fired up the glue gun and started pulling out our inner Martha Stewart/Kate Middleton. After we were done making our custom made fascinators, we (of course) posed for pictures and headed on over to the local watering hole in our new creation, causing a few to stop and stare along the way. Ok, tons of people stopped and stared-seven white girls in Malaysia in fascinators, heels and dresses? I would have stared too. We even had people come and take pictures with us, which totally made us feel like the Queen of England, who, on occasion, has been known to wear a fascinator herself. Check out our awesome fascinators and tell me you don’t want one! 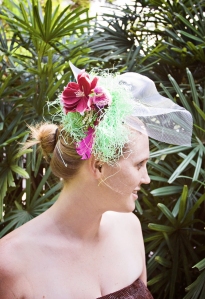 Lindsay's is effective from the front and the back!

So many things going on up there!

Tash's might have been the most clever of all! Her bird in the fascinator, HAD a fascinator!

The finished products! Tell me you love them!